The first ever MLC&G chess tournament was met with overwhelmingly positive responses. We had 17 players in all. Although it was a very top heavy field, we had some good competition along all the ranks.

Ken Murray had a nice attacking win over talented kid Ram Singh, in the last round to take the U1600 Prize with a strong 2 point showing. It’s worth noting that the field was so strong, that the U2000 prize  was split between 4 players with 1 point.

The battle for the top place spots was extremely competitive. We had 1 GM, 2 IMs, and 6 Masters, including a Vilanova student from India coming in at 2177 FIDE. GM Bryan Smith hung a piece in the 2nd round against “Iron-Man” Boris Privman, which led to a key match up between the other two tournament favorites. Me, (IM Tom Bartell) and, IM Igor Khmelnitsky. I won a nice positional squeeze on the white side of a Benko Gambit, and then in round 4, I secured 1st with a last round draw to “The Great Rufus” Rodion Rubenchik.

Below is Ken Murray, and “Matt-Job” Matt O’Brien tapping into the dark side in tandem. 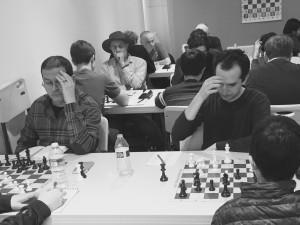